Eighth in our occasional series of Schwamb Shares

Visitors  who have toured the Mill’s downstairs front office may have learned that the Mill’s current phone number 781-643-0554 is essentially the same one that the Clinton W. Schwamb Co. had as early as 1921 — 0554. Here’s the earliest phone bill in the Mill’s archives.

Clinton and Louis Schwamb sometimes attached notes on phone usage to the bills to be sure they were only charged for completed calls, and to track calls by themselves and “others” such as employees or visitors.

In the notes above, we see most calls were placed by Clinton and Louis Schwamb, with a few calls by other persons. The two calls made by Dr. Smith on Dec 12, 1921, are interesting because employee Vincent Kearney was hurt that day at 1:30 p.m., according to an accident report. (“Operator was sawing small piece of stock and ran end of finger into saw…”). The injury, from the blade on the “scroll band saw,” was described as a slight flesh cut to the end of left fore-finger.  Dr. Smith’s phone calls from the Mill’s phone suggest he was called in to check the wound.

The accident report itself records the physician as Dr. Sanford (listed in the Arlington True List as Robie Sanford of 1300 Massachusetts Avenue, Arlington). The employee, Vincent Kearney, lost no time from the accident. Dr. Smith is not mentioned in any of the other accident reports in the archives; he may have practiced nearby though he does not appear to have lived in Arlington (unless it was Holden Smith, veterinarian).

As this example shows, even with a wealth of records — phone logs, accident reports, town lists and directories — questions always remain. In relating a story like this one to visitors, it is tempting to fill in or conflate details. The facts as we know them still give a more vivid, life-like picture of the Mill in its daily operations.

Clinton and Louis Schwamb took over the Mill in 1904, and initially their workforce, customers, and expenses were modest. Their ledgers show that they did not pay for phone service from New England Telephone & Telegraph until March 1906, when they paid in cash for three months service in advance.  They paid monthly for service thereafter, $3.88 per month, in 1906.

Yet clearly the Schwamb Mill had a phone before then. In what is now the “frame gallery” on the second floor, is the outline of a 1890/1900s wall phone that was mounted to the south wall before it was painted in a light cream color.

The oldest graffiti on this painted wall records a first snow in October of 1903. If the phone was already on the wall and painted around, as it appears, then it precedes the later phone service and even Clinton and Louis’s assuming management in November 1904. 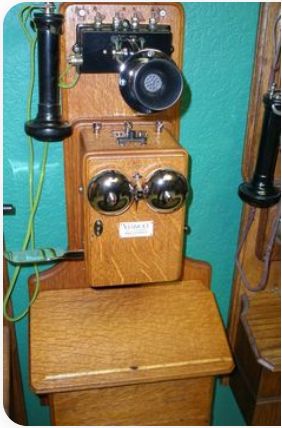 The outline  does not clearly correspond to any wall phone we can identify. (Here is one at right that is roughly comparable, minus the backing board.) The large shape at bottom is likely where the battery cells were kept. The outline of a wire connects this to the rectangular shape of the phone itself, typically a wooden box with a mounted speaking piece in center, a listening piece on the left that a user could literally “hang up” or leave “off the hook,” and a crank on the right to signal that the user wanted the local operator to connect a call. Two cloth insulated wires remain in the wall at the top.

Evidence of use on the wall nearby also strongly suggests that this outline is of a telephone. This includes

While we do not have accounting records before November 1904, when Carl William Schwamb was in charge of the factory, we do have access to phone directories for New England Telephone & Telegraph from the 1880s to 1901, on the Internet Archive.

Charles Schwamb and Son, Moulding and Picture Frame Manufacturers had a listing from July 1898 to as late as 1901 (we have not yet found later directories on line). The phone number was Arlington 111-3.

An advantage of using the online scanned version of this directory (with the text available digitally) is that one can search the phone numbers written on the wall to see who the business was talking to … with different degrees of certainty.

For example, none of the phone numbers or notes are dated — so knowing what year’s directory to check is a problem. But on the assumption that the phone was in use around 1900, we can enter each number and, usually, find many results for that number. Often too many results.

Then as now, more than two, three or four digits was needed to make a phone call. Today we have a lot to remember:

In 1900, it was easier — you would tell this information to the operator …

… and she would connect your call to that town and number. For a populous city like Boston, you would need to know the name of the local exchange such as Haymarket, Oxford, etc., that covered nearby streets.

The people who jotted down numbers on the wall next to the phone at the Mill certainly knew both the exchange and number, whether they were making or receiving a call. Our assumption is that these users remembered the exchange or what town they were calling, and only wrote down the subscriber number — the part they were likely to forget. For us in the twenty-first century, with search functionality across dozens of directories, each thousands of pages long, we still cannot be certain if the manager or worker who wrote down 151-2 meant …

… or any of a dozen less plausible but entirely possible subscribers.

Here are a few numbers we do feel certain about.

These two are known customers based on the Schwambs’ 1904 ledgers.

These two numbers have exchanges that make us feel more certain of them.

These two numbers are written on the wall as a pair, much as they appear in the directory.

The rest of the numbers lead to many business and residences, all intriguing, none with any other evidence to make us certain of them. Virtually any four digit number will lead to a lumber supplier somewhere in New England … as well as fish dealers, carriage makers, druggists, and residences. Nevertheless, these are slight clues that may one day point us to more information about the Mill in the late nineteenth and early twentieth centuries.

The section of the second floor that today serves as the Mill’s “frame gallery” seems to have served several purposes in the past. In addition to the south wall being painted a cream color (helpful for reading in low light?) there is a wooden ceiling above the space, all painted the same blue-gray. The ceiling would have kept dust and debris from dropping into this space from the third floor. The Mill’s roll-top desk, listed in inventories and named by Carl William Schwamb as a possession in letters, was on this second floor as late as 1970 before it was moved to the front office on the first floor. At some point in the twentieth century, whiting (a gesso like compound) was applied to frames or mouldings in this space, based on the gesso on the walls and graffiti by Louis Schwamb in 1917.

The outline of a phone similar in shape and measurements to the outline on the second floor can also be seen in the Mill’s front office on the first floor. The varnish on the wood where the phone was mounted is darker and better preserved than the slightly crazed and whitened varnish around the phone’s outline. Its measurements are the same as the outline upstairs. The front office with its safe, as well as the mill’s turbine, were all added in the late 1880s under the management of Carl William Schwamb, son of the founder Charles Schwamb. Much of this outline is obscured by a large green board on which are mounted electrical switches from the mid twentieth century.

Theodore Schwamb, whose piano case factory was down the brook from the Charles Schwamb mill, had a residential phone as early as April 1895. A second phone was installed in his factory by January 1900.

FRIENDS OF THE MILL APPEAL

Please consider renewing as (or becoming) a Friend of the Mill this spring. Here are some options for becoming a Friend in 2020:

– Consider a recurring monthly donation – an option you will see on the same donation form online. An automatic monthly gift of 2, 3 or 5 dollars allows even modest support to add up over time.

We look forward to opening soon.

One thought on “Telephone Comes to the Mill”