The minute they step in the door, visitors to the Mill sense that very little has changed since it closed as a business in 1969. Founding Trustee Patricia Fitzmaurice deserves credit for instituting two policies that have kept the life in our living history museum for the past fifty years.

First, she made it a priority that the frame-making work of the Mill continue and that there always be a wood turner producing the oval frames that are the Mill’s signature product. Frames on their way to completion can always be found on the bandsaw and faceplate lathes, or in the glue room, keeping the machinery from becoming mere sculpture pieces, as Patricia put it.

Second, she avoided changes to the Mill that could not be reversed; in particular, she retained all the objects she found there, even seemingly insignificant objects like boxes. (At right: A soap box from Chas. F. Bates & Company, 123 Oliver St., Boston, Mass.)

The Mill’s many worn boxes and other containers (like the jelly jar full of screws and the fruit crate containing wooden scraps in your own basement workshop) contribute to the Mill’s atmosphere. They also hint at its history as part of the local commercial fabric of Massachusetts in the early twentieth century. As far as we can tell, the many containers in the Mill date from 1900-1969, roughly the period when the business was in the hands of Clinton and Louis Schwamb, and Clinton’s son Elmer.

Here are some examples.

The Mill has nearly a dozen tea crates with painted labels stating origins in Ceylon and India.

Most of these tea crates are lidless and serve as receptacles for scrap wood and moulding, as they did in the Schwambs’ day. In the 1969 Edward Dooks film of Elmer at the bandsaw, we see a tea crate alongside for the uncut remainders, just as there is today. Other tea crates are seen in photos of the second floor taken by Len Gittleman in his many visits to the Mill in 1969-1970.

As common as the tea crates are soap boxes of several sizes, some, like this Ivory Soap container, big enough to stand on for an impromptu speech in the streets.

Others soap boxes may have served as both shipping crates and grocery store displays in the early 1900s, like this box labeled Enoch Morgan’s Sons Manufacturers of Sapolio, Soap, & Chemicals, in the glue room.

Sapolio, a unknown name to us in the twenty-first century, was once synonymous with store-bought soap, an early brand made famous through advertising. More about the company can be read here.

A smaller version of the Sapolio box can be seen nailed to the wall near the area where the Mill’s moulding machine one stood.

One reason wooden shipping crates are still collectible is that they were well made, often with interlocking joints at the corners and wood strong enough to keep the product safe over weeks or months of travel. Someone at the Mill thought that the sides of a Borax Soap crate were good material for a frame pattern.

The original, intact box may have looked something like this:

Canned goods were as common in pantries one hundred years ago as they are today. Handy shipping boxes for canned goods could be had at any of the nearby Arlington grocers of the early twentieth century. Here are two sides of a wooden box that shipped Square Brand Maine Corn from H.L. Forhan, Portland, Maine, to W.K. Hutchinson, Arlington, Mass.

W.K. Hutchinson, located at 659-663 Massachusetts Ave., with a branch at the corner of Mass. Ave and Park Ave, was a five-minute walk from the Schwamb factory in the 1910s and 1920s. The Arlington Directory shows that it carried groceries and farm products, garden seeds, fish and oysters.

As for H.L. Forhan, the name on the other side of this box, it was an early producer of canned goods that got its start in the nineteenth century. Below is a photo of the Gorham, Maine, plant and its workers in the early twentieth century, apparently dealing with a shipment of fresh Maine corn.

Another local Arlington grocer was Charles G. Sloan, listed as proprietor of the Crescent Market, located at Massachusetts Ave. and Park Ave. in the 1910s. Here is a crate originally sent to him, now in the Mill’s glue room.

Another glue-encrusted box from the Mill’s second floor glue room is this one from Collins-Lee Co., Chelsea, Mass.

Founded in 1881, Collins-Lee Co. smoked fish for restaurants as well as commercial sale. The fish in this box was described simply as “smoked fillets.”

However, the company produced a once-famous Boston staple to rival baked beans: finnan haddie, or smoked haddock. New England families — native-born Yankees, maritime Canadians, Catholic immigrants — ate this fish broiled or baked in a milk-based casserole. Restaurants like Jimmy’s Harborside and Anthony’s Pier Four, both with finnan haddie on the menu, sent haddock to be smoked at Collins-Lee Co. The Boston Globe ran a story on this last-of-its-kind smokehouse when it closed in December 1966 (“Is It the Last Hurrah For Finnan Haddie?” Crandall, Dorothy. Boston Globe, Boston, Mass. [Boston, Mass] 21 Dec 1966: 31).

Another local food producer is named on this box.

Founded in Boston in the 1880s, the Walter M. Lowney Company built a factory for processing chocolate in Mansfield in 1903.

Some grocery items, like the cereal Shredded Wheat below, are familiar to us today. The Natural Food Co. of Niagara Falls apparently went by this company name between 1901 and 1908, dating this box in the glue room.

A repurposed box that once contained the canned products of the Richardson & Robbins Co. of Dover, Delaware, was fashioned into a drawer in the ancient workbench that holds the Mill’s elliptical faceplate lathes.

The “boned meats” canned by R&R included chicken; the company was also known for its canned plum pudding.

Of course, even if some brands have vanished from our consciousness today, others ring a bell even without a single legible word.

As a working factory, the Clinton W. Schwamb Company received equipment and industrial materials in boxes, barrels and bags. Here is a crate that once held product from the Canada Paint Company, Limited.

The painted label on this box is now faded, but better preserved specimens for sale online show that the illustration of a can and paint drops were once colored red. Any of Canada Paint Company’s products would have been useful to the Schwambs, whether paint for the buildings or varnish-like finishes for frames.

Another crate, stowed away in corner beneath dozens of frame patterns, bears the name Chandler & Farquhar Co. Boston Mass.

Chandler & Farquhar Co., Boston, Mass., was a dealer in machinery, machine parts, and factory supplies. Pages from the Schwambs’ ledgers show them ordering steel wool, oil cups, fire extinguishers, and other small items from this company.

Basic hardware like nails also came in kegs or barrels. Here are two examples, both bearing names of vendors listed in the Schwambs’ ledgers of the 1910s and 1920s: R.W. Shattuck of Arlington, Mass., and A.J. Wilkinson, of Boston, Mass.

The Schwambs bought metal hardware from both businesses, including steel and tools from Wilkinson, that might have been delivered in empty nail barrels. Just as possible, a mill hand might have collected the empty barrels for their usefulness in the shop. Here is a keg that once held No. 8 nails from the Wheeling Wire Nail Co., owners of the steel works at Portsmouth, Ohio.

The Mill has two crates for Remington typewriters. Here is one:

The Schwambs had up-to-date office equipment, including, in 1926, a typewriter that could disappear into a desk by means of a slide on heavy springs. We do not know if they owned Remington typewriters. The model depicted on this box label resembles the Remington “standard” typewriter model 10 or 11, probably from about 1909.

In a pinch, any box can meet a need to keep small items together. Here is a candy box labeled “High backs Prepared patterns” …

…and its contents, as described.

Like most American cities in the late nineteenth and early twentieth centuries, Boston had many cigar factories that often employed unionized workers who rolled cigars by hand. Boston had a cigar workers strike in July-August of 1919, which resulted in a few factories relocating and investing in machinery to replace hand work. Silver Cigar Company remained, however. Based on the price listed, the box is likely from the 1910s or 1920s. The price of 5 cents always reminds readers of the sardonic comment by Vice President Thomas Marshall in response to idealistic, high-blown pronouncements of the country’s needs: “What this country needs is a really good five-cent cigar.”

An interesting conversation with a life-long collector of cigar boxes can be read here.

As handy as boxes are cans, and the Mill has dozens of cans used to store small parts, wood samples, and other items. Two of many early twentieth century tobacco tins at the Mill can be seen below.

What were all these tobacco containers doing at the Mill when its insurance policies stipulated — and its safety signage proclaimed — “No Smoking”? 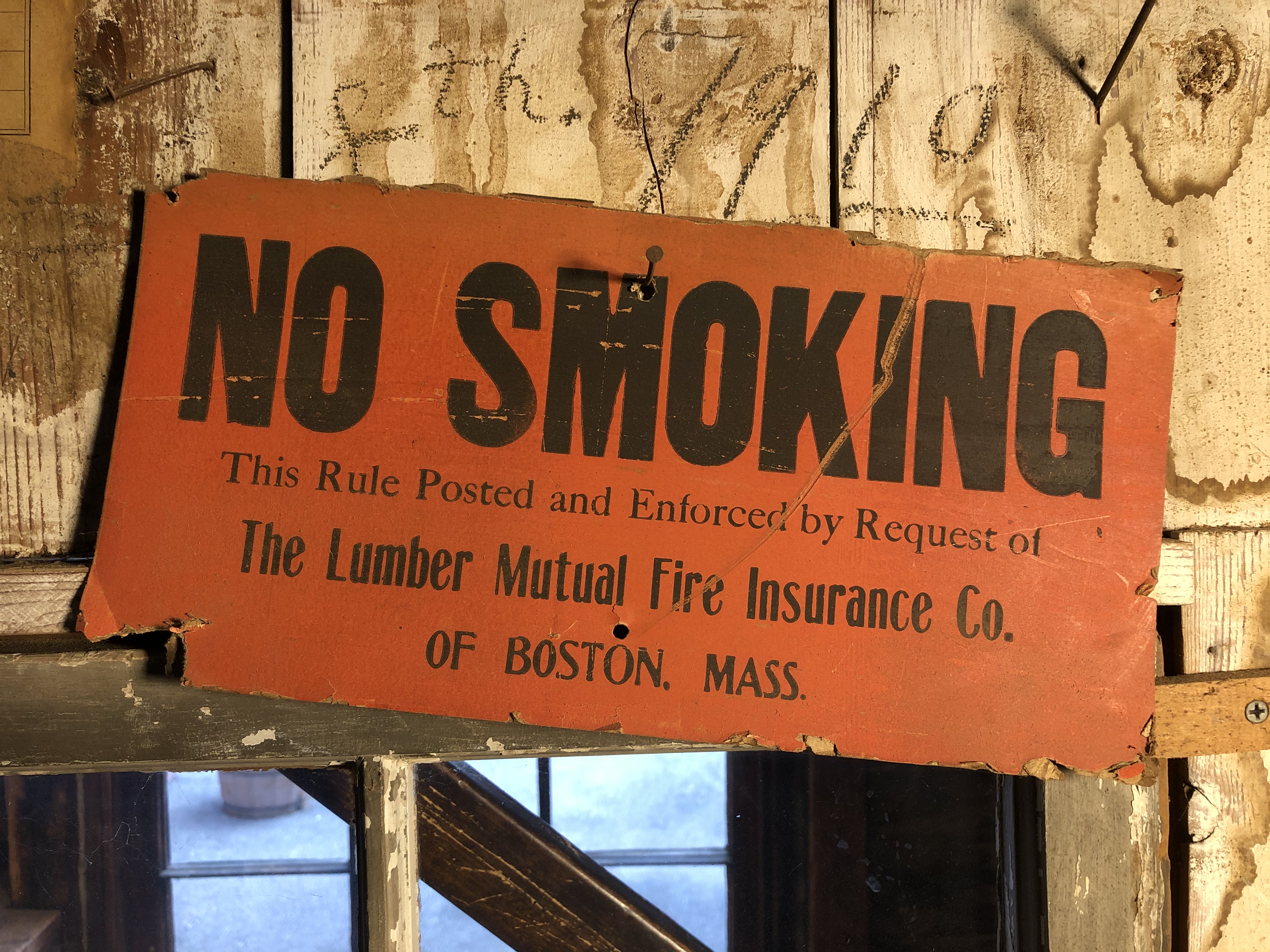 From correspondence in the archives, we know that the owners made clear that visiting workmen needed to take the no smoking rules seriously. Elmer Schwamb’s son Wayne worked at the mill in the 1950s and says that smoking in the building was most definitely not allowed, but that on break outside the Mill, workers smoked. For the record, Clinton and Louis Schwamb both smoked pipes, while Elmer Schwamb smoked cigars.

A curious container is this can of Leader Hand Soap, distributed by the Blue Bird Company, 47-49 Walden St, Cambridge, Mass.

What little we know of this company we learned from its “help wanted” advertisements in the Boston Globe in the 1920s:

Perhaps the Schwambs accepted a sample or bought a container on trial.

Cans could also serve to catch a drip at a joint between steam pipes, as seen below.

We will close this blog with this simple can of tomatoes from S. S. Pierce.

S.S. Pierce Co. Importers and Grocers – founded in 1831 – was a Boston brand with four generations of loyalty by the early twentieth century. Like many grocers, they delivered to homes, but also had retail shops in suburbs such as Winchester and Melrose. While S.S. Pierce carried canned goods as basic as tomatoes, they are remembered for catering to epicures (a bit like Trader Joe’s does today) with items like turtle soup, truffled quail, peach jelly, smoked oysters, wine and liqueurs. Like many other repurposed containers, this can gives the Old Schwamb Mill a look and feel distinct to its location near Boston.

For a brief history of the S.S. Pierce Company, you may enjoy this blog post by local historian Anthony Sammarco.

This period of reduced visitation due to the COVID-19 is a challenge for non-profits like the Old Schwamb Mill. Your contribution in support of the Mill, however modest, is much appreciated at this time. We look forward to reopening soon!

6 thoughts on “Boxes in the Mill”