At the Mill, we often find tools and other objects that we cannot identify. Manufactured tools are easy to look up, but not so jigs and other custom-made objects.

Shaker Workshops had used the Mill’s Barn for its showroom for nearly 40 years before ceasing operations there in 2019. In preparing the Barn for a new tenant, we removed bundles of wood strips, many over 10 feet long, from the rafters of the Barn’s second floor. Though many were irregular in width, they clearly resembled the wooden strips run through the Mill’s S. A. Woods moulder, the heavy machine with four cutter-heads that turned out thousands of feet of linear moulding for frame shops each week. We saved a large quantity of strips in each type of wood found.

Along with these strips we found bundles of wooden objects clearly shaped for some purpose. As a rule, these objects were three to four feet long, tapered at one end, marked by staggered semi-circular carve outs perpendicular to and further back from the tapered end. The pieces were crudely fashioned and there were dozens of them.

What were they used for? We had some clues, and an examination of the pieces by the Mill’s tenant Melissa Carr of Masterworks Conservation soon revealed others.

–> There were numerous pieces fashioned like these, and they had been saved. We suspected that they were not intended for a single use and were a common tool or jig in the days when the Mill ran as a business.

–> The semi-circular cut outs suggested use with a rotating knife or blade, possibly the shaper or moulding machine. 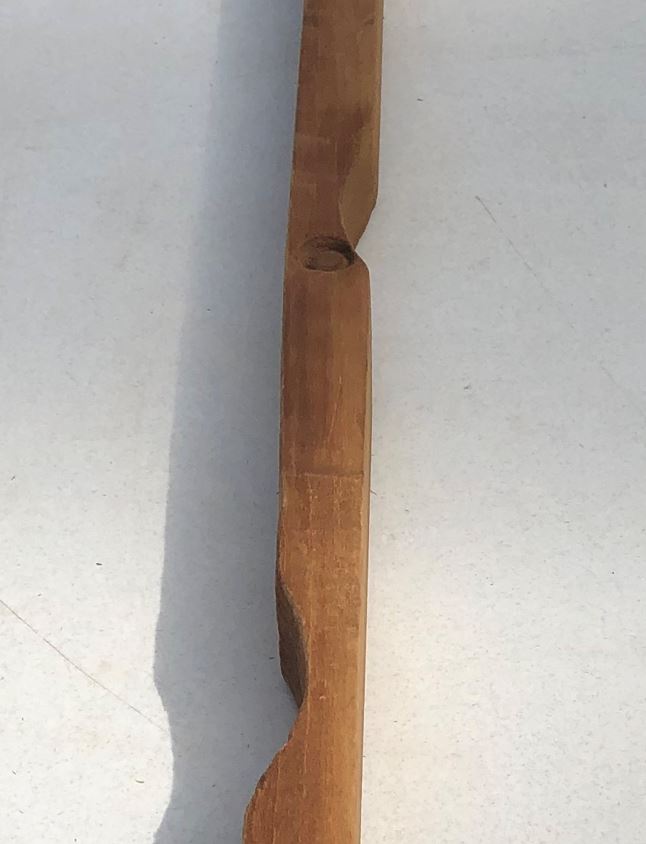 –> Most of the pieces also showed a small circular indentation that clearly resembled the pinch point of a clamp. The pieces had been held tightly in place during use.

–> Most of the pieces also showed a sharp cut like the tooth in a ratchet, again suggesting they were held firmly in place during use.

–> Some of the pieces had names, dates, or order numbers on them. When we looked into the archives, we discovered that these numbers were for orders of linear moulding. This again suggested that the pieces had a connection with the S. A. Woods moulder that once occupied the now-open space at the west of the first floor.

Since we no longer have the moulder, we still had no idea how the pieces were used.

We did, however, have Jim Roach. It so happened that this former employee of the Mill (1957-1961) would be visiting the next day. It took him awhile to come to a conclusion, but when he did, it made perfect sense. The pieces were used when running a moulding order, braced atop the actual strip of wood being run through the moulder to keep it snugly in place as the high-speed cutters trimmed first the left, then the right, and lastly the bottom sides of the wood. The curved carve outs allowed the cutter heads and attached knives to rotate without interference from the jig itself, and the tapered end gave similar play to the final cutter head operating at ninety degrees to the other two. The piece was held firmly in place by means of the ratchet cut and the screw clamp, each leaving its mark.

As Jim Roach has noted in a previous interview, the highly paid moulder was “a man apart” who worked with an assistant; a young turner such as Jim would have little opportunity to gain first-hand experience with the wooden jigs we had found. But he certainly would have seen them in use, and his lifelong career as a woodworker after leaving the Schwamb Mill added professional judgment to his identification.

When researcher Tom Calderwood went to Maryland to film the use of a multi-head moulding machine similar to the one the Schwambs had owned, he brought a steel knife from the collection to attach to the machine, thus running a piece of “Schwamb” moulding. A disappointment with the simple piece of moulding he ran was the vibration or skittering of the wood as it ran through the moulder, resulting in rapid indentations that marred the finish of the demo piece. Such indentations would have been unacceptable to any frame shop ordering from the Schwambs and would have wasted high-quality wood. The hold-down pieces we discovered in the barn were essential to turning out thousands of feet of smoothly finished moulding on the powerful S. A. Woods moulder.

Whether the Schwambs themselves or an early museum personnel bound these pieces up and stored them in the Barn rafters across the road from the Mill we do not know. But shortly after learning what these pieces were, we observed that in the Mill itself, in the ceiling above where the moulding machine once stood, were over a dozen more of these hold-down pieces and designed for the very same purpose. It is another example of how, by preserving pieces that do not make immediate sense, the Old Schwamb Mill museum learns about a largely undocumented industrial past, and allows for discovery of everyday tools hidden in plain sight.

As the year ends, your contribution in support of the Old Schwsamb Mill’s Annual Appeal, however modest, is much appreciated! Visit the Mill’s Donation page to contribute securely online via PayPal or credit card.